On the Eastern Calendar today...

The Celebration of the Sobor (Assemblage) of the Leader of the Heavenly Hosts Michael, and the Other Heavenly Bodiless Hosts

The Celebration of the Sobor (Assemblage) of the Leader of the Heavenly Hosts Michael, and the Other Heavenly Bodiless Hosts was established at the beginning of the IV Century at the local Laodician Council, which occurred several years before the First OEcumenical Council. The Laodician Council by its 35th Canon condemned and renounced as heretical the worship of angels as creators and rulers of the world and it affirmed their proper Orthodox veneration. A feastday was established in November – the ninth month from March (with which month the year began in ancient times) – in accordance with the 9 Ranks of Angels. The eighth day of the month was decreed for the intended Sobor (Assemblage) of all the Heavenly Powers – in conjunction with the Day of the Dread Last-Judgement of God, which the holy fathers called the "Eighth Day", – since after this age in which the seven days [of Creation] have elapsed will come the "Eighth Day", – and then "shalt come the Son of Man in His Glory and all the holy Angels together with Him" (Mt. 25: 31).       The Angelic Ranks are divided into three Hierarchies: – highest, middle, and lowest. In the Highest Hierarchy are included the three Ranks: the Seraphim, Cherubim and Thrones. Closest of all to the MostHoly Trinity stand the six-winged Seraphim [Seraphimy] (Flaming, and Fiery) (Is. 6: 12). They blaze with love for God and impel others to it. 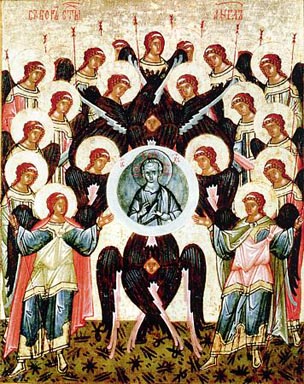 Wonderworker Newsletter: Dormition of the Theotokos 2021

Please in your kindness donate if you can. This mission provides critical services to the Orthodox and other communities in Africa https://orthodoxafrica.org/donate-now/